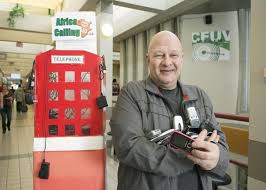 Kevin Davis is a Camosun grad and current UVic student. He is also founder of Africa Calling, although he hates titles. He’d rather be known simply as “the cellphone guy.” For those who have not seen the program’s red collection bin in the SUB—the thing that looks like a London phone booth—Africa Calling is a group that collects used cellphones for African villages. It started three years ago with 70 phones and has since grown tremendously, helping and inspiring everyone from fellow students to entire African villages.

One day, during class in his Intro to Africa course at Camosun, Davis raised his hand. He did it to volunteer for the class project of collecting cellphones for Africa.

“I thought, ‘Okay, I’ll collect some phones for my professor, and he’ll take them on his next trip,’” says Davis. He set up a table for the purpose. “I was getting some amazing feedback from people,” he recalls. “I had one student that came up to me and told me they just had come back from a co-op, and one phone had acted as a lifeline for an entire village of 1 500 people, and that really changed things for me.”

The project is centred around Ubuntu, a Bantu philosophy. Davis describes it as “people are people because of other people . . . or, ‘I am because you are.’” People bring whatever they have to the table in order to help out in their own way. “Next time your friend says ‘Hey, check out my new phone,’ you say ‘Hey, what are you doing with your old one?’” he suggests.

Phones with built-in SIM cards can only be used locally, so Africa Calling places them with local women’s shelters. Any broken phones are taken to the proper recycle depot.

Africa Calling is frequently asked why it does not collect and distribute other supplies, such as food, water, or clothing. Davis replies that “With cellphones, people can get all those other things in Africa . . . They want cellphones!”

The spirit of Ubuntu continues to drive Africa Calling to help those in need. “This program is like magic,” Davis says. “People are really drawn to it, and I don’t know if it’s just because it’s cellphones, or if it’s Ubuntu itself, or if it’s a combination of both.” (This is from UVic’s Martlet http://www.martlet.ca/bus-tech/a-calling-for-charity/)

One student making a difference, one phone at a time.2015-02-272015-04-02https://makingsociologymatter.com/wp-content/uploads/2015/04/making-sociology-matter-white.pngMaking Sociology Matterhttps://makingsociologymatter.com/wp-content/uploads/2015/02/BUS_Africa-calling_Brandon-Everell.jpg200px200px
Recent Posts 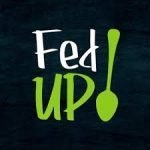